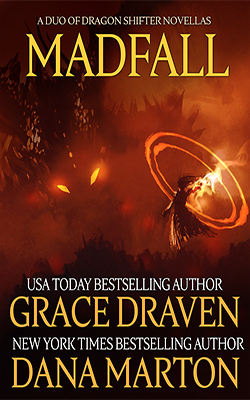 Four years ago, Leida was the golden-voiced favorite of a dragon lord until she stole a single treasure and vanished without a word. Magnus Silverclaw is a long-lived earth dragon skilled in the ways of magic. Furious over his human mistress's betrayal, he has sworn retribution and when she is captured, he has his chance. Leida is dragged before a dragon tribunal for high treason where the punishment is death.

But time hasn't dimmed her love for Magnus, nor cooled the fires of their mutual attraction. Throwing herself at the dragon's mercy, Leida is horrified to learn her fate: a bespelled silver collar set with gems and four years of servitude to her former lord. The revenge is everything the earth dragon could wish except for one thing - his beautiful mistress refuses to divulge the reason for her deception. Leida of the Glimmer South has a carefully guarded secret that can either reunite her with Magnus, or tear them apart forever...

~Draconus was previously published by the now-defunct Amber Quill Press.~

Draknart is the scourge of the countryside, a dragon well accustomed to defeating and devouring all the knights and sacrificial maidens sent his way. But when another maiden turns up at his cave, he finds that she's not the easy meal he expected. Einin of Downwood is fierce and unafraid... and she's armed for battle. Intrigued, Draknart realizes that not only does his intended victim arouse more than just his appetite, her arrival is could be fortuitous in more ways than one.

Flood, famine and war has ravaged the village of Downwood, and the local priest blames Draknart's evil influence. Hoping to lift the curse on her village, Einin seeks out the dragon with the aim of being a slayer rather than a sacrifice. What she doesn't know is that Draknart is a dragon under a fairy queen's curse himself, doomed to transform to a man from midnight until dawn. To her surprise, Draknart offers her a bargain, one that might help her village - but at a high cost. With few options and even fewer resources at her command, Einin has no choice but to make a deal with a dragon...