For Crown and Kingdom 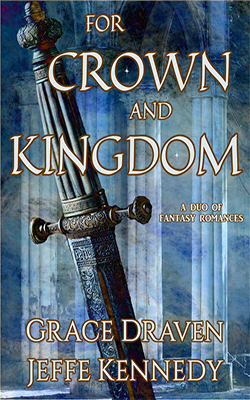 THE UNDYING KING by Grace Draven

The stories are told in whispers, even after so long: of a man whose fair rule soured when he attained eternal youth. Imprisoned by a sorceress wife in a city out of time and place, he has passed into legend. Few believe in him, and fewer would set their hopes on his mercy. But Imogen has no choice. To break the curse that's isolated her since birth, she'll find the Undying King--and answer his secrets with her own...

THE CROWN OF THE QUEEN: a novella of the Twelve Kingdoms by Jeffe Kennedy

It's been a lifetime since librarian Dafne Mailloux saw the coronation of the tyrant who destroyed her family. She did her part to pull him off the High Throne. But his daughter, the would-be Queen, and her sisters must still tame their conquest. If her victory is to last, Dafne must forge peace with the subtle, ruthless methods of a diplomat--and the worst memories of her life.

One of Library Journal's best genre fiction books of 2016!