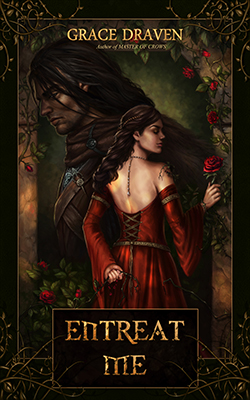 Afflicted by a centuries-old curse, a warlord slowly surrenders his humanity and descends toward madness. Ballard of Ketach Tor holds no hope of escaping his fate until his son returns home one day, accompanied by a woman of incomparable beauty. His family believes her arrival may herald Ballard’s salvation. …until they confront her elder sister. Determined to rescue her sibling from ruin, Louvaen Duenda pursues her to a decrepit castle and discovers a household imprisoned in time. Dark magic, threatening sorcerers, and a malevolent climbing rose with a thirst for blood won’t deter her, but a proud man disfigured by an undying hatred might. Louvaen must decide if loving him will ultimately save him or destroy him. A tale of vengeance and devotion.

The Shrew and the Beast Ambrose had said she was a widow, and Ballard could only guess how her husband must have worked himself into an early grave trying to remain master of his household with such a wife.  This woman was used to handing down edicts and having them obeyed.  “If I agree, what do you intend to do while you reside in my castle, eating my food and using my firewood to warm yourself?  Ketach Tor requires a lot of upkeep and we’re a diminished household.  Everyone here attends to several tasks.” He thought her spine might snap if she stiffened any more.  She crossed her arms and scowled.  “Cinnia and I aren’t leeches, my lord, nor are we unskilled.  I brew a vile ale and can burn this place down around your ears trying to cook; however, I’m an accomplished spinner and silk thrower, an adequate seamstress and an exceptional scrivener.  Cinnia apprenticed under Marguerite de Pizan as a scribe, illuminator and bookbinder.  Neither of us are women of nobility, nor do we fear hard work.  I’ve scrubbed plenty of floors, laundered linens, cared for the sick, and helped bury the dead.  What do you wish of me?” Ballard listened to her passionate dissertation without interrupting.  Louvaen Duenda had an answer for most things and an argument for everything else.  She didn’t debate; she went to war.  His respect for Cinnia blossomed.  The girl had a stronger backbone than he credited her for if she hadn’t yet buckled under the weight of her sister’s imposing personality.  Fascinated, he succumbed to the temptation to tease Mistress Duenda and maybe render her tongue-tied. “What do I wish of you?”  He paused, his gaze sweeping over her from the top of her head to the tips of her toes peeking out from her hem.  Her hands, long-fingered and pale, gripped her upper arms.  “You, in my bed,” he said.